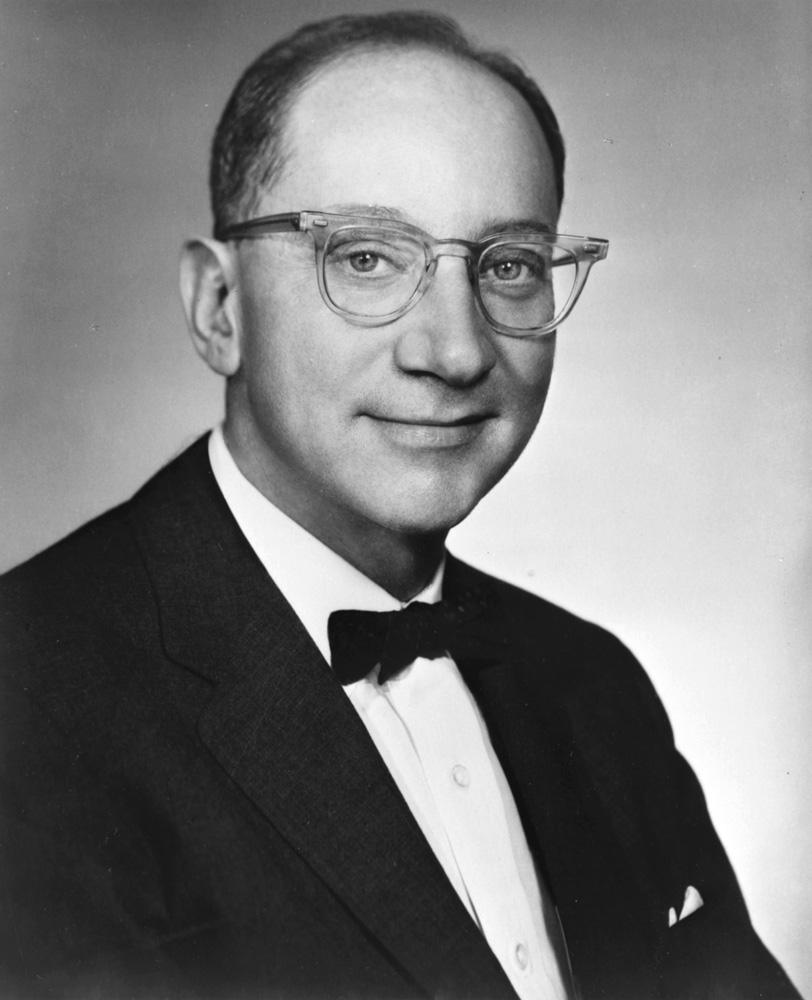 Edward H. Levi became dean of the University of Chicago Law School in 1950, succeeding Wilber G. Katz in the role. As dean, Levi oversaw the marked academic and physical growth of the Law School. Under the auspices of the University’s general development campaign of 1955-1957, Levi established a separate campaign for the Law School that raised funds for new buildings to house the expanding school and to recruit esteemed scholars to the faculty. Notable additions to the Law School faculty included Karl Llewellyn, Soia Mentschikoff (the Law School’s first female professor), Nicholas Katzenbach, and Allison Dunham. These professors raised the school’s profile, and the inclusion of specialists from the social sciences furthered the Law School’s commitment to including other academic disciplines in the study of law.

The successful fundraising campaign, along with grant funding from the Ford Foundation, led to Levi’s most tangible contribution to the Law School: Laird Bell Law Quadrangle, located just south of the Midway. The quad, designed by architect Eero Saarinen, featured four buildings – three low structures and one six-story glass-walled library and office building, all situated around an open court and reflecting pool. The new facility was a modern space that could comfortably house the growing student body and faculty (as well as their many research projects) and the smaller, seminar-style class sessions that were becoming increasingly popular. It also featured the Weymouth Kirkland courtroom, where the Illinois Supreme Court periodically heard its cases, giving students easy access to actual court proceedings. Nearby Burton-Judson Residence Hall was designated as a dormitory for law students. Supreme Court Chief Justice Earl Warren laid the cornerstone for the construction of the new facilities and Vice-President Richard M. Nixon dedicated the buildings when they were completed just over a year later in 1959. [See pictures of Laird Bell Law Quadrangle in the Levi image gallery!]

The Ford’s Foundation impressive $1.275 million grant, awarded to the Law School in 1956, also provided funding for instruction in legislative drafting and new law fellowships that encouraged exchange between American law graduates and those of British commonwealth schools. Levi felt that the growing international scope of American industry and business required greater knowledge of foreign law among future lawyers.

The growth of the Law School under Levi’s leadership was reflected in the new institutions that were born during these years. The Journal of Law and Economics and The Supreme Court Review were both established at this time. The Law School opened the Mandel Legal Aid Clinic in 1957, one of the first of its kind in the country. The school also fostered partnerships with the American Bar Association and American Law Foundation, both headquartered in Hyde Park.

Near the end of Levi’s tenure, the Law School comprised students from 37 states, 19 foreign countries and territories, and 208 universities and colleges. Boasting a student body of great potential, an accomplished and pioneering faculty, and state-of-the-art facilities, the Law School was poised for even further success in the coming years. Chief Justice Warren offered his impression of the school’s future at its 1959 dedication: “It will be unique among the law schools of the world…It will provide the best opportunity in America for an integrated approach to the many problems that confront all of us in the administration of Justice.” [See a longer excerpt of Chief Justice Warren’s address in the 1961 Cap and Gown in the Levi Documents series!]