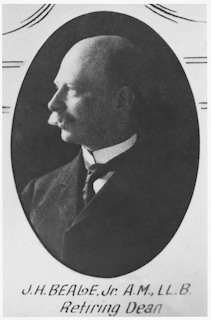 At the turn of the twentieth century, University of Chicago President William R. Harper set out to create a premier law school in the West. He looked to Harvard Law School as his model and asked the HLS faculty to aid his endeavor. Law professor Joseph Henry Beale emerged as the ideal person for the job of Law School dean. President Harper offered him the job and Beale accepted, eager for the chance to build a new law school from the ground up. In the spring of 1902, Beale obtained a leave of absence from HLS for the following two years and got to work right away, before even leaving Cambridge for Chicago. [See the March 27, 1902 letter from Beale to Rainey for more!]

Beale quickly began assembling the Law School’s first faculty, bringing on board distinguished law professors such as Julian W. Mack, a former classmate at HLS; James Parker Hall, a future dean of Chicago Law who graduated near the top of his class at HLS five years earlier; Floyd R. Mechem from the University of Michigan Law School; and later, Harry A. Bigelow, another future dean of Chicago Law.

Beale and Hall, along with Professor Clarke Butler Whittier, formed a committee that created the law school’s first curriculum, which the full faculty approved in April 1902. The first year’s courses followed the traditional model set by Harvard – for example, Contracts, Torts, Property, and Criminal Law (the latter taught by Beale) – but the second- and third-years featured elective and interchangeable courses that marked a departure from pedagogical tradition. These courses included Administrative Law, International Law, Roman Law, and Legal Ethics, among others.

Next, Beale turned to the matter of the Law School’s library. With the help of Professors Ernst Freund and Julian W. Mack, along with William Schenk, a cataloguer Beale recruited from the HLS library, he rapidly began gathering the foundation for Chicago’s library. In fewer than six months, they amassed over 18,000 volumes. The Law School’s first Circular of Information boasted that the holdings were believed to be “superior to any other law school in the West.” [See a picture of the Law School’s reading room in Stuart Hall in the Beale image gallery!]

Beale knew there was one more element necessary to establish a prestigious and dynamic law school at the University of Chicago: a lively school spirit fostered through clubs and extracurricular activities. He emphasized the importance of student organizations, noting how they contributed to the camaraderie and intellectual rigor of Harvard Law. The Joseph Beale Jr. Law Club opened November 18, 1902 (the Law School’s very first quarter) and the Stephen A. Douglas chapter of Phi Delta Phi, a law fraternity of which Beale was a sponsoring faculty member, opened the following spring. Beale also hoped to establish a law review at Chicago, as it was a signature feature of HLS. However, the small faculty at Chicago and the demanding work of getting the school off the ground prevented the realization of that goal.

In recognition of his efforts on behalf of the Law School, the University of Chicago and the University of Michigan each awarded Beale with an honorary LL.D. on the completion of his time at Chicago. [Explore the Beale Documents series to learn more about the profound influence Joseph Henry Beale, Jr. had on American legal education.]