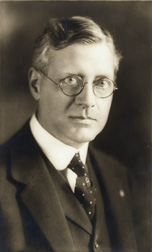 Hall’s legacy as the longest-serving and one of the earliest deans of the University of Chicago Law School was profound. Law professor Floyd R. Mechem claimed that Hall held high ideals for the Law School and maintained rigorous standards for admission and graduation in order to ensure its excellence. Mechem wrote in a 1928 tribute to Hall in the Illinois Law Review: “During his entire service, he guarded the interests of the Law School with zealous if not jealous care and attention. The standing which the Law School has attained is in large measure attributable to his untiring efforts in its behalf.” [See the full tribute in the Hall Documents series!]

Hall, a devoted and skilled teacher, was a favorite among the Law School’s students. He was a leader in the field of legal education, often writing on the philosophy of legal education and the role of law schools in American society. In the early twentieth century, the course of study and degrees offered by different law schools varied much more than today. Hall felt strongly that legal education was a matter for graduate study, a model that the University of Chicago and its Law School helped to further. He believed that an undergraduate education was necessary for a student to understand the social problems that legal principles sought to remedy. This outlook went hand in hand with the more comprehensive approach to the academic study of law (rather than purely professional training) that the University of Chicago Law School pioneered throughout the twentieth century.

In addition to his work at the University of Chicago Law School, Hall contributed to numerous other legal and educational organizations. He directed the American Judicature Society and chaired the legal research committee of the Commonwealth Fund. Hall was active in the Association of American Law Schools and served as the association’s president in 1921-1922. He played a leading role in the American Law Institute in the 1920s, as a member of its council and executive committee. From 1922-1925 he was a member of the board of trustees of him alma mater, Cornell University.