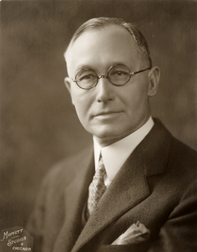 After the sudden passing of Dean Hall in 1928, Bigelow was appointed Dean of the Law School, and named the first John P. Wilson Professor. His most significant contribution to the Law School were the curricular innovations he implemented, which placed the University of Chicago on the vanguard of American legal education.

Bigelow and other faculty members felt that the profound transformations in social and economic life in recent years had greatly impacted the legal field, making the relation of law to other social sciences a central question for any institution of legal education. Bigelow thus oversaw the expansion of the curriculum to include subjects not traditionally taught in American law schools, such as economics, psychology, history, political science, and statistics. Under the “New Plan,” the curriculum gradually grew from three years to four beginning in the Autumn of 1937 (though the pre-legal requirement was lessened from two years to one and students who had already completed their undergraduate degree could fulfill the program in three years). The requirements of Chicago’s legal training shifted from numerous, discrete courses on specific legal topics to broader courses that integrated multiple legal subjects as well as the social sciences. The examination structure similarly moved from quarterly course-specific exams to cumulative end-of-year exams. Bigelow intended for the new curriculum to fulfill two purposes. First, integrating the study of various legal subjects with that of other social issues would prepare students for the reality of the complicated and multifaceted legal problems they would face in professional practice. Second, the wider curriculum would help the Law School satisfy its obligation to prepare students for the various career paths that lawyers had begun to pursue in earnest in the early decades of the twentieth century, in fields like public administration, legislative bodies, and the judiciary. The curriculum would continue to undergo many changes over the years – including a return to a three-year plan of legal study in 1949 – but the emphasis on the social sciences as a means to improve the study of law would remain a core part of the Law School’s spirit into the present. [Learn more about the New Plan in the Bigelow Documents series!]

In addition to the “New Plan,” Bigelow oversaw the founding of The University of Chicago Law Review, which began publishing in 1933 and continues to serve as an esteemed law journal to this day. Dean Bigelow relinquished his office in 1939 when he reached the University’s retirement age of 65, but he continued to teach Conflict of Laws and Property for several years as Professor Emeritus.

Browse the Harry A. Bigelow Collections: